Computer networks consist of many different components and protocols working together. To understand the concept of how node to node communication happens, let's get familiar to the OSI model and TCP/IP model. Both models help to visualize how communication between nodes is happening.

The Open Systems Interconnection (OSI) model is a 7-layer model that today is used as a teaching tool. The OSI model was originally conceived as a standard architecture for building network systems, but in real-world networks are much less defined than the OSI model suggests.

This model has the same purpose as the OSI model but fits better into modern network troubleshooting. Comparing to the OSI model, TCP/IP is a 4-layer model:

The most commonly used link layer protocol (OSI Layer2) in computer networks is the Ethernet protocol. In order to communicate, each node has a unique assigned address, called MAC (Media Access Control address) sometimes it is also called an Ethernet address.

It is 48-bit long and typically fixed by the manufacturer (cannot be changed), but in recent years customization of MAC addresses is widely used, RouterOS also allows to set custom MAC address.

There are three types of addresses:

Ethernet protocol is sufficient to get data between two nodes on an Ethernet network, but it is not used on its own. For Internet/Networking layer (OSI Layer 3) IP (Internet Protocol) is used to identify hosts with unique logical addresses.

Most of the current networks use IPv4 addresses, which are 32bit address written in dotted-decimal notation (192.168.88.1)

There can be multiple logical networks and to identify which network IP address belongs to, the netmask is used. Netmask typically is specified as a number of bits used to identify a logical network. The format can also be in decimal notation, for example, the 24-bit netmask can be written as 255.255.255.0

As can be seen from the illustration above high 24 bits are masked, leaving us with a range of 0-255.

From this range, the first address is used to identify the network (in our example network address would be 192.168.3.0) and the last one is used for network broadcast (192.168.3.255). That leaves us with a range from 1 to 254 for host identification which is called unicast addresses.

The same as in Ethernet protocol there can be also special addresses:

In case of logical IP network, unicast, broadcast and multicast visualization would look a bit different

There are also address ranges reserved for a special purpose, for example, private address range, that should be used only in local networks and typically are dropped when forwarded to the internet:

ARP and Tying It All Together

Even though IP packets are addressed using IP addresses, hardware addresses must be used to actually transport data from one host to another.

This brings us to Address Resolution Protocol (ARP) which is used for mapping the IP address of the host to the hardware address (MAC). ARP protocol is referenced in RFC 826.

Each network device has a table of currently used ARP entries. Normally the table is built dynamically, but to increase network security, it can be partially or completely built statically by means of adding static entries.

Address Resolution Protocol is a thing of the past. IPv6 completely eliminates use of the ARP.

When a host on the local area network wants to send an IP packet to another host in this network, it must look for the Ethernet MAC address of destination host in its ARP cache. If the destination host’s MAC address is not in the ARP table, then the ARP request is sent to find the device with a corresponding IP address. ARP sends a broadcast request message to all devices on the LAN by asking the devices with the specified IP address to reply with its MAC address. A device that recognizes the IP address as its own returns ARP response with its own MAC address: 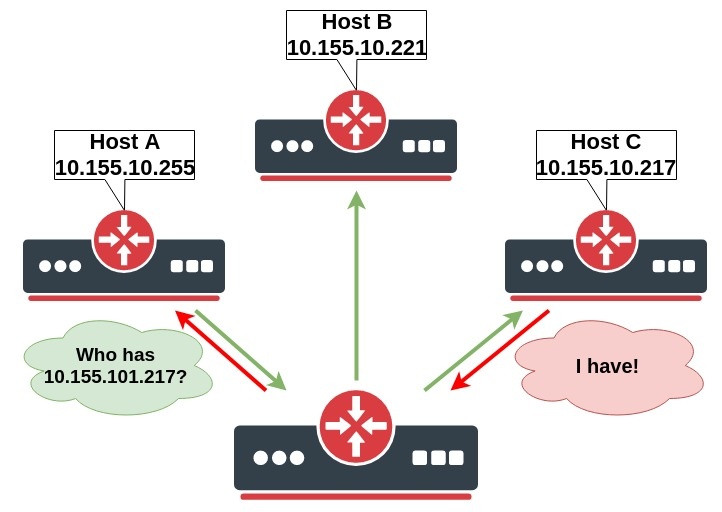 Let's make a simple configuration and take a closer look at processes when Host A tries to ping Host C.

At first, we add IP addresses on Host A:

Now, let's run a packet sniffer that saves packet dump to the file and run the ping command on Host A:

Now you can download arp.pcap file from the router and open it in Wireshark for analyzing:

If we look at ARP tables of both host we can see relevant entries, in RouterOS ARP table can be viewed by running command: /ip arp print

Now the example above demonstrated default behavior, where ARP is enabled on interfaces, but there might be scenarios where different ARP behavior is necessary. RouterOS allows configuring different ARP modes for interfaces that support ARP.

ARPs will be discovered automatically and new dynamic entries will be added to the ARP table. This is a default mode for interfaces in RouterOS and illustrated in the example above.

If the ARP feature is turned off on the interface, i.e., arp=disabled is used, ARP requests from clients are not answered by the router. Therefore, static ARP entry should be added to the clients as well. For example, the router's IP and MAC addresses should be added:

If the ARP property is set to reply-only on the interface, then the router only replies to ARP requests. Neighbour MAC addresses will be resolved using /ip arp statically, but there will be no need to add the router's MAC address to other hosts' ARP tables like in cases where ARP is disabled.

A router with properly configured proxy ARP feature acts as a transparent ARP proxy between directly connected networks. This behavior can be useful, for example, if you want to assign dial-in (PPP, PPPoE, PPTP) clients IP addresses from the same address space as used on the connected LAN. 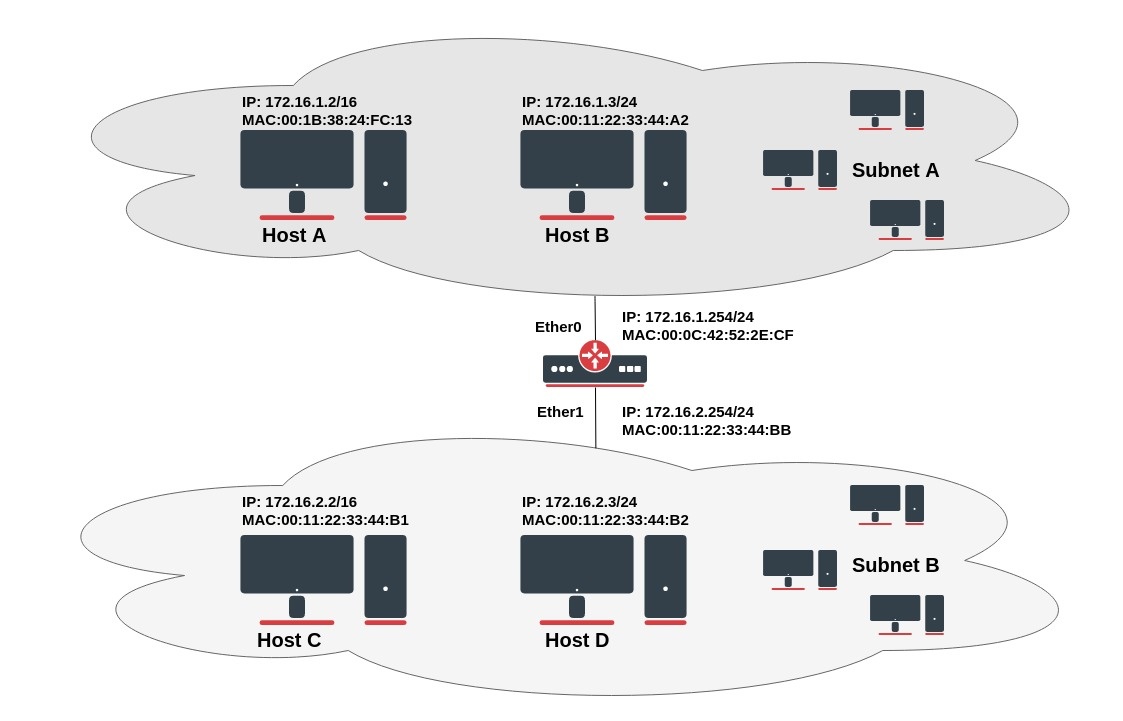 Let's look at the example setup from the image above. Host A (172.16.1.2) on Subnet A wants to send packets to Host D (172.16.2.3) on Subnet B. Host A has a /16 subnet mask which means that Host A believes that it is directly connected to all 172.16.0.0/16 network (the same LAN). Since the Host A believes that is directly connected it sends an ARP request to the destination to clarify the MAC address of Host D. (in the case when Host A finds that destination IP address is not from the same subnet it sends a packet to the default gateway.). Host A broadcasts an ARP request on Subnet A.

Since the router knows that the target address (172.16.2.3) is on another subnet but it can reach Host D, it replies with its own MAC address to Host A.

When Host A receives ARP response it updates its ARP table, as shown:

Multiple IP addresses by the host are mapped to a single MAC address (the MAC address of this router) when proxy ARP is used.

Proxy ARP can be enabled on each interface individually with command arp=proxy-arp:

if the arp property is set to local-proxy-arp on an interface, then the router performs proxy ARP to/from this interface only. I.e. for traffic that comes in and goes out of the same interface. In a normal LAN, the default behavior is for two network hosts to communicate directly with each other, without involving the router.

This is done to support (Ethernet) switch features, like RFC 3069, where the individual ports are NOT allowed to communicate with each other, but they are allowed to talk to the upstream router. As described in RFC 3069, it is possible to allow these hosts to communicate through the upstream router by proxy_arp'ing. Don't need to be used together with proxy_arp. This technology is known by different names:

TCP uses a three-way handshake whenever the transmitting device tries to establish a connection to the remote node. As a result end-to-end virtual (logical) circuit is created where flow control and acknowledgment for reliable delivery are used. TCP has several message types used in connection establishment and termination process.

Connection-oriented protocol services are often sending acknowledgments (ACKs) after successful delivery. After the packet with data is transmitted, the sender waits for acknowledgment from the receiver. If time expires and the sender did not receive ACK, a packet is retransmitted.

When the data transmission is complete and the host wants to terminate the connection, the termination process is initiated. Unlike TCP Connection establishment, which uses a three-way handshake, connection termination uses four-way massages. A connection is terminated when both sides have finished the shutdown procedure by sending a FIN (finish) and receiving an ACK (Acknowledgment).

Now that we know how the TCP connection is established we need to understand how data transmission is managed and maintained. In TCP/IP networks transmission between hosts is handled by TCP protocol.

Let’s think about what happens when data-grams are sent out faster than the receiving device can process. The receiver stores them in memory called a buffer. But since buffer space is not unlimited, when its capacity is exceeded receiver starts to drop the frames. All dropped frames must be re-transmitted again which is the reason for low transmission performance.

To address this problem, TCP uses a flow control protocol. The window mechanism is used to control the flow of the data. When a connection is established, the receiver specifies the window field in each TCP frame. Window size represents the amount of received data that the receiver is willing to store in the buffer. Window size (in bytes) is sent together with acknowledgments to the sender. So the size of the window controls how much information can be transmitted from one host to another without receiving an acknowledgment. The sender will send only the amount of bytes specified in window size and then will wait for acknowledgments with updated window size. 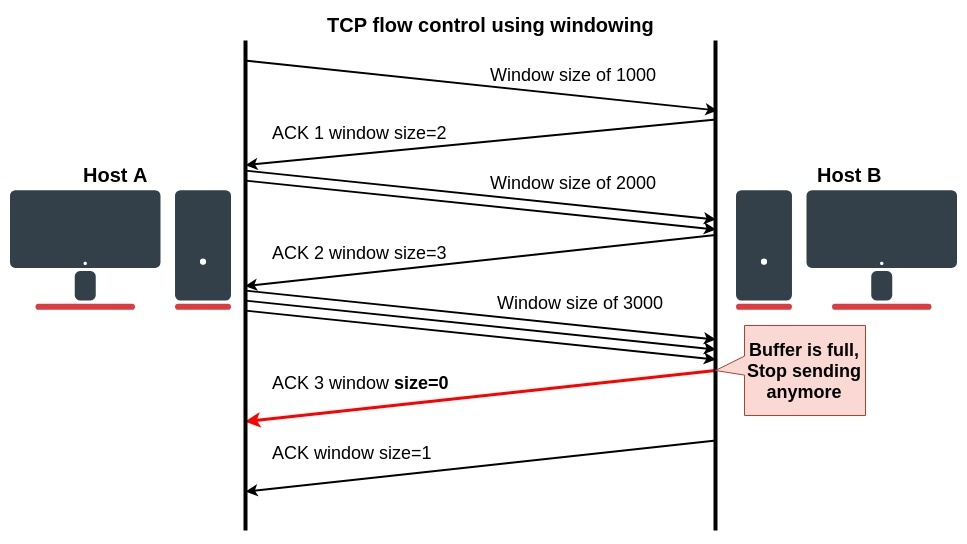