In IPv6 networks, hosts learn about routers by receiving Router Advertisements used by the Neighbor Discovery (ND) protocol. ND already has a built-in mechanism to determine unreachable routers. However, it can take up to 38 seconds to detect an unreachable router. It is possible to change parameters and make detection faster, but it will increase the overhead of ND traffic especially if there are a lot of hosts. VRRP allows the detection of unreachable routers within 3 seconds without additional traffic overhead.

Virtual Router Redundancy Protocol (VRRP) provides a solution by combining a number of routers into a logical group called Virtual Router (VR). VRRP implementation in RouterOS is based on VRRPv2 RFC 3768 and VRRPv3 RFC 5798.

It is recommended to use the same version of RouterOS for all devices with the same VRID used to implement VRRP.

According to RFC authentication is deprecated for VRRP v3 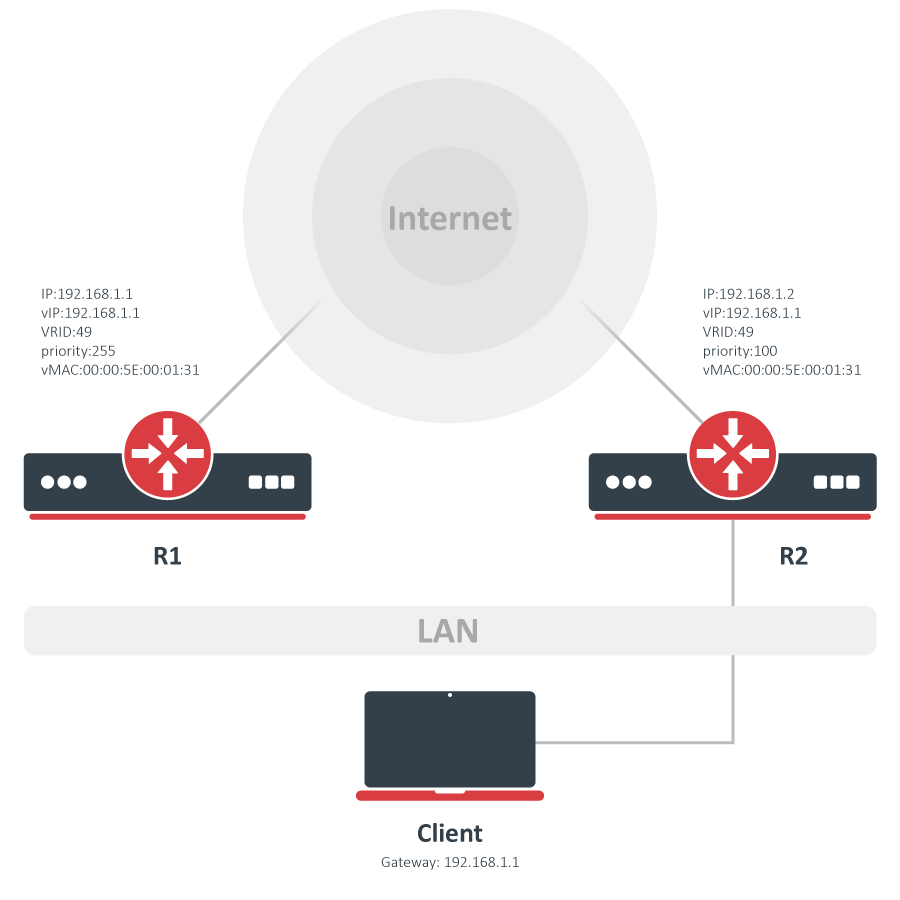 The purpose of the VRRP is to communicate to all VRRP routers associated with the Virtual Router ID and support router redundancy through a prioritized election process among them.

These packets are always sent with TTL=255 and are not forwarded by the router. If for any reason the router receives a packet with lower TTL, a packet is discarded.

Each VR node has a single assigned MAC address. This MAC address is used as a source for all periodic messages sent by Master.

Only the Master router is sending periodic Advertisement messages to minimize the traffic. A backup will try to preempt the Master only if it has the higher priority and preemption is not prohibited.

All VRRP routers belonging to the same VR must be configured with the same advertisement interval. If the interval does not match router will discard the received advertisement packet.

A Virtual Router (VR) consists of one Owner router and one or more backup routers belonging to the same network.

VRRP automatically assigns MAC address to VRRP interface based on standard MAC prefix for VRRP packets and VRID number. The first five octets are 00:00:5E:00:01 and the last octet is configured VRID. For example, if Virtual Routers VRID is 49, then the virtual MAC address will be 00:00:5E:00:01:31.

Virtual mac addresses can not be manually set or edited.

An Owner router for a VR is the default Master router and operates as the Owner for all subnets included in the VR. Priority on an owner router must be the highest value (255) and virtual IP is the same as real IP (owns the virtual IP address).

RouterOS can not be configured as Owner. The Pure virtual IP configuration is the only valid configuration unless a non-RouterOS device is set as the owner. 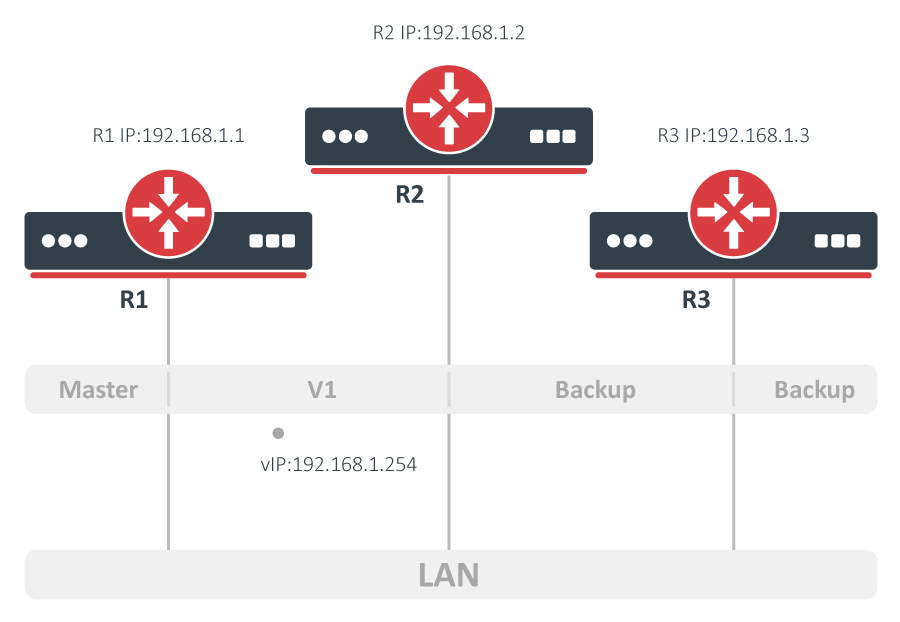 Virtual IP associated with VR must be identical and set on all VR nodes. All virtual and real addresses should be from the same network.

RouterOS can not be configured as Owner. VRRP address and real IP address should not be the same.

All Virtual Router members can be configured so that virtual IP is not the same as physical IP. Such a virtual address can be called a floating or pure virtual IP address. The advantage of this setup is the flexibility given to the administrator. Since the virtual IP address is not the real address of any one of the participant routers, the administrator can change these physical routers or their addresses without any need to reconfigure the virtual router itself.

As you may know, in IPv6 networks, the Neighbor Discovery protocol is used instead of ARP. When a router becomes the Master, an unsolicited ND Neighbor Advertisement with the Router Flag is sent for each IPv6 address associated with the virtual router.

As you can see from the diagram, each VRRP node can be in one of three states:

The purpose of this state is to wait for a Startup event. When this event is received, the following actions are taken:

When in the backup state,

Routers' main task is to receive advertisement packets and check if the master node is available.

The backup router will transmit itself to the master state in two cases:

After the transition to Master state node is:

In other cases, advertisement packets will be discarded. When the shutdown event is received, transit to Init state.

Preemption mode is ignored if the Owner router becomes available.

When the MASTER state is set, the node functions as a forwarding router for IPv4/IPv6 addresses associated with the VR.

In IPv4 networks, the Master node responds to ARP requests for the IPv4 address associated with the VR. In IPv6 networks Master node:

If advertisement packet is received by master node:

When the shutdown event is received, send the advertisement packet with priority=0 and transit to Init state.

To sync connection tracking entries configure the device as follows:

Verify configuration in the logging section:

Connection tracking entries are synchronized only from the Master to the Backup device.

If multiple VRRP interfaces are configured between two units, then it is enough to enable sync-connection-tracking=yes on one (preferably master) VRRP interface.

Notice that only the 'interface' parameter was specified when adding VRRP. It is the only parameter required to be set manually, other parameters if not specified will be set to their defaults: vrid=1, priority=100 and authentication=none.

Address on the VRRP interface must have /32 netmask if the address configured on VRRP is from the same subnet as on the router's any other interface.

To make VRRP work in IPv6 networks, several additional options must be enabled - v3 support is required and the protocol type should be set to IPv6:

Now when the VRRP interface is set, we can add a global address and enable ND advertisement:

No additional address configuration is required as it is in the IPv4 case. IPv6 uses link-local addresses to communicate between nodes.