IGMP (Internet Group Management Protocol) and MLD (Multicast Listener Discovery) snooping allow the bridge to listen to IGMP/MLD communication and make forwarding decisions for multicast traffic based on the received information. By default, bridges are flooding multicast traffic to all bridge ports just like broadcast traffic, which might not always be the best scenario (e.g. for multicast video traffic or SDVoE applications). The IGMP/MLD snooping tries to solve the problem by forwarding the multicast traffic only to ports where clients are subscribed to, see an IGMP/MLD network concept below. RouterOS bridge is able to process IGMP v1/v2/v3 and MLD v1/v2 packets. The implemented bridge IGMP/MLD snooping is based on RFC4541, and IGMP/MLD protocols are specified on RFC1112 (IGMPv1) RFC2236 (IGMPv2), RFC3376 (IGMPv3), RFC2710 (MLDv1), RFC3810 (MLDv2). 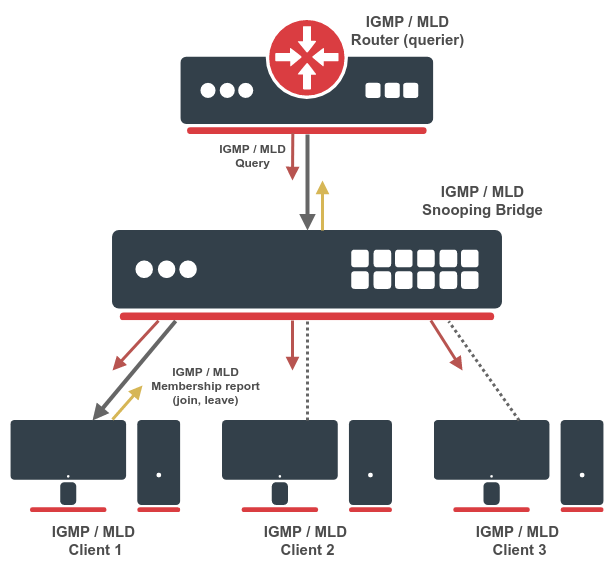 The bridge will process the IGMP/MLD messages only when igmp-snooping is enabled. Additionally, the bridge should have an active IPv6 address in order to process MLD packets. At first, the bridge does not restrict the multicast traffic and all multicast packets get flooded. Once IGMP/MLD querier is detected by receiving an IGMP/MLD query message (the query message can be received by an external multicast router or locally by bridge interface with enabled multicast-querier), only then the bridge will start to restrict unknown IP multicast traffic and forward the known multicast from the multicast database (MDB). The IGMP and MLD querier detection is independent, which means that detecting only IGMP querier will not affect IPv6 multicast forwarding and vice versa. The querier detection also does not restrict the forwarding of non-IP and link-local multicast groups, like 224.0.0.0/24 and ff02::1. 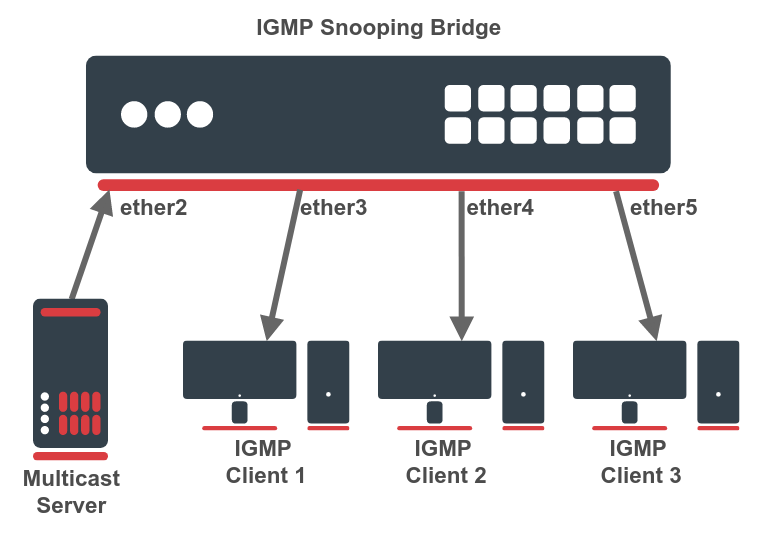 The basic IGMP snooping configuration is finished. Use "/interface bridge mdb print" command to monitor the active multicast groups. If necessary, you can configure an IP address and DHCP server on the same bridge interface.

The second example adds some complexity. There are two IGMP snooping bridges and we need to isolate the multicast traffic on a different VLAN. See a network scheme below. 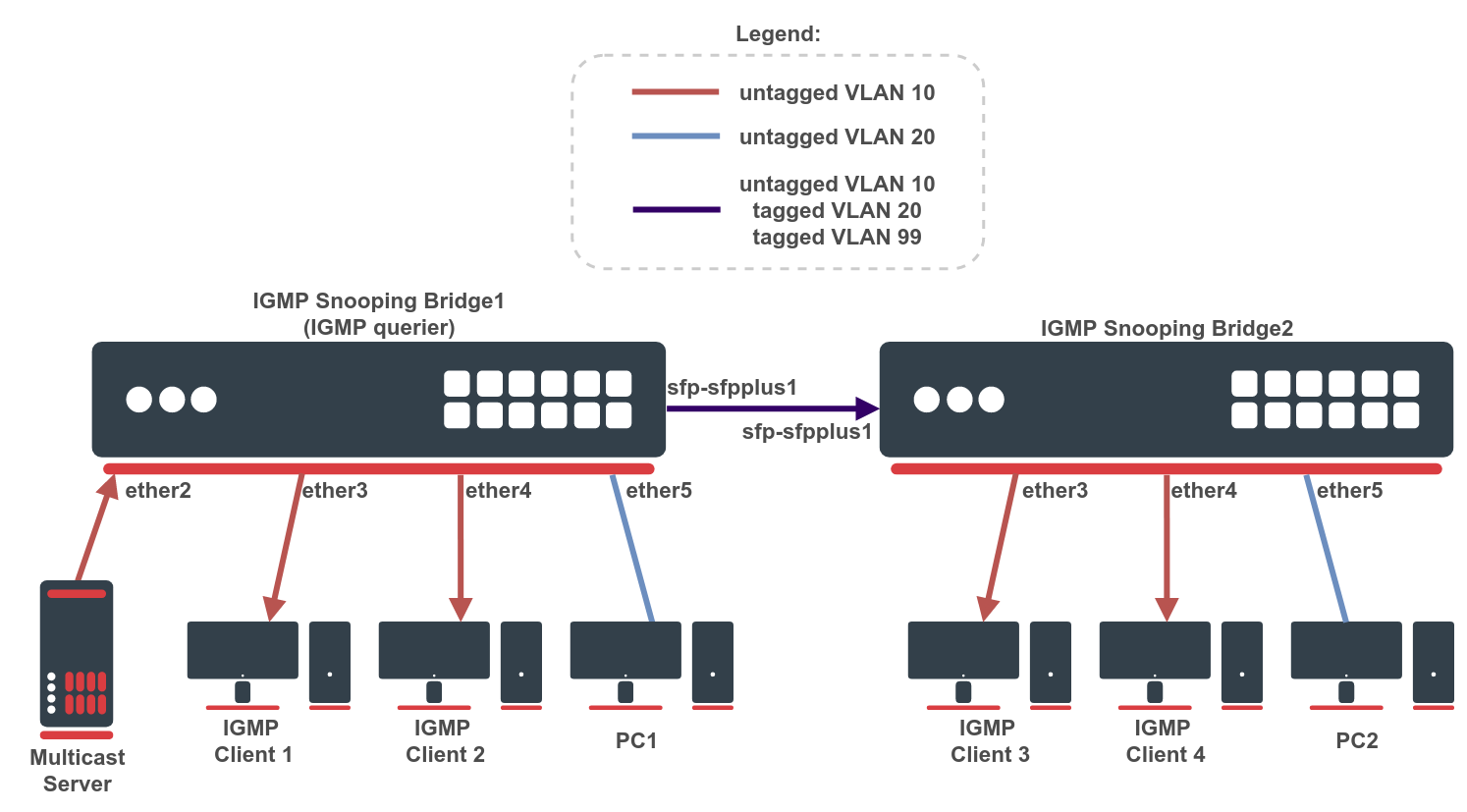 First, create a bridge on both devices and add needed interfaces as bridge ports. To change untagged VLAN for a bridge port, use the pvid setting. The Bridge1 will be acting as an IGMP querier. Below are configuration commands for the Bridge1:

Make sure to configure management access for devices. It is essential when configuring a bridge with VLAN filtering. In this example, a VLAN 99 interface with an IP address is added to the bridge. This VLAN will be allowed on the tagged sfp-sfpplus1 port. Below are configuration commands for the Bridge1:

Add bridge VLAN entries and specify tagged and untagged ports. The VLAN 99 entry was already created when configuring management access, only VLAN 10 and VLAN 20 should be added now. Below are configuration commands for the Bridge1:

At this point, VLANs and IGMP snooping are configured and devices should be able to communicate through ports. However, it is recommended to go even a step further and apply some additional filtering options. Enable ingress-filtering and frame-types on bridge ports. Below are configuration commands for the Bridge1:

Verify the results with the print command:

In case a certain IPv6 multicast group does not need to be snooped and it is desired to be flooded on all ports and VLANs, it is possible to create a static MDB entry on all VLANs and ports, including the bridge interface itself. Use the command below to create a static MDB entry for multicast group ff02::2 on all VLANs and ports (modify the ports setting for your particular setup):