The DHCP (Dynamic Host Configuration Protocol) is used for the easy distribution of IP addresses in a network. The MikroTik RouterOS implementation includes both server and client parts and is compliant with RFC 2131.

The MikroTik RouterOS DHCP client may be enabled on any Ethernet-like interface at a time. The client will accept an address, netmask, default gateway, and two DNS server addresses. The received IP address will be added to the interface with the respective netmask. The default gateway will be added to the routing table as a dynamic entry. Should the DHCP client be disabled or not renew an address, the dynamic default route will be removed. If there is already a default route installed prior to the DHCP client obtaining one, the route obtained by the DHCP client would be shown as invalid.

DHCP client has the possibility to set up options that are sent to the DHCP server. For example, hostname and MAC address. The syntax is the same as for DHCP server options.

Currently, there are three variables that can be used in options:

After the interface is added, you can use the "print" or "print detail" command to see what parameters the DHCP client acquired:

DHCP client status can be checked with:

It is possible to execute a script when a DHCP client obtains a new lease or loses an existing one. This is an example script that automatically adds a default route with routing-mark=WAN1 and removes it when the lease expires or is removed.

Resolve default gateway when 'router' (option3) is from a different subnet

In some cases, administrators tend to set the 'router' option which cannot be resolved with offered IP's subnet. For example, the DHCP server offers 192.168.88.100/24 to the client, and option 3 is set to 172.16.1.1. This will result in an unresolved default route:

To fix this we need to add /32 route to resolve the gateway over ether1, which can be done by the running script below each time the DHCP client gets an address

Now we can further extend the script, to check if the address already exist, and remove the old one if changes are needed

DHCP-client in RouterOS is capable of being a DHCPv6-client and DHCP-PD client. So it is able to get a prefix from DHCP-PD server as well as DHCPv6 stateful address from DHCPv6 server.

It is possible to add a script that will be executed when a prefix or an address is acquired and applied or expires and is removed using DHCP client. There are separated sets of variables that will have the value set by the client depending on prefix or address status change as the client can acquire both and each of them can have a different effect on the router configuration.

To determine what IAID will be used, convert internal ID of an interface on which DHCP client is running from hex to decimal.

For example, DHCP client is running on interface pppoe-out1. To get internal ID use following command

This simple example demonstrates how to enable dhcp client to receive IPv6 prefix and add it to the pool.

It works! Now you can use this pool, for example, for pppoe clients.

Use received prefix for local RA 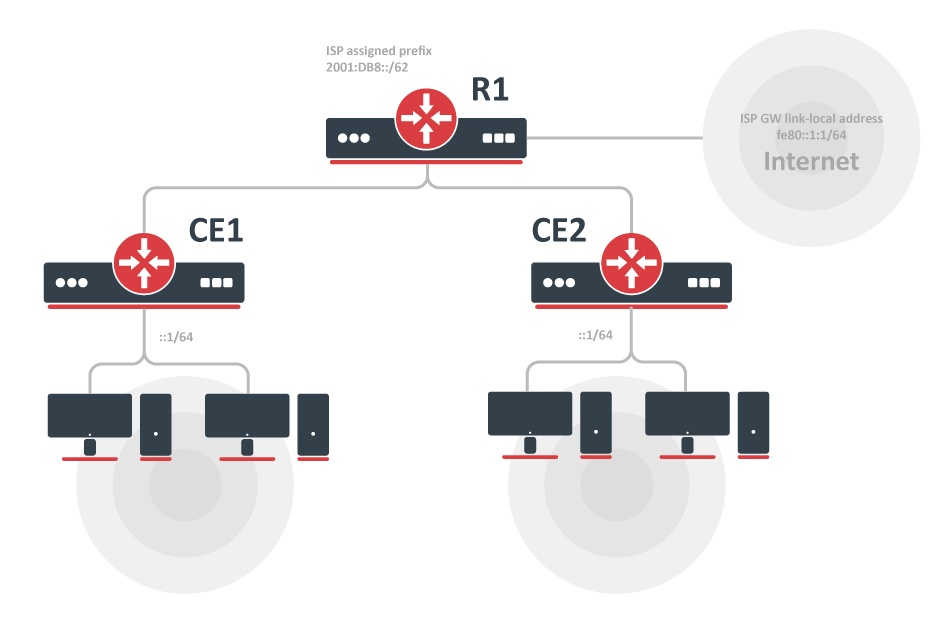 We can also see that IPv6 address was automatically added from the prefix pool:

And pool usage shows that 'Address' is allocating the pool

The DHCP (Dynamic Host Configuration Protocol) is used for the easy distribution of IP addresses in a network. The MikroTik RouterOS implementation includes both server and client parts and is compliant with RFC 2131.

The router supports an individual server for each Ethernet-like interface. The MikroTik RouterOS DHCP server supports the basic functions of giving each requesting client an IP address/netmask lease, default gateway, domain name, DNS-server(s) and WINS-server(s) (for Windows clients) information (set up in the DHCP networks submenu)

In order for the DHCP server to work, IP pools must also be configured (do not include the DHCP server's own IP address into the pool range) and the DHCP networks.

It is also possible to hand out leases for DHCP clients using the RADIUS server; the supported parameters for a RADIUS server are as follows:

DHCP server lease submenu is used to monitor and manage server leases. The issued leases are shown here as dynamic entries. You can also add static leases to issue a specific IP address to a particular client (identified by MAC address).

Generally, the DHCP lease is allocated as follows:

A client may free the leased address. The dynamic lease is removed, and the allocated address is returned to the address pool. But the static lease becomes busy until the client reacquires the address.

This sub-menu allows the configuration of how often the DHCP leases will be stored on disk. If they would be saved on a disk on every lease change, a lot of disk writes would happen which is very bad for Compact Flash (especially, if lease times are very short). To minimize writes on disk, all changes are saved on disk every store-leases-disk seconds. Additionally, leases are always stored on disk on graceful shutdown and reboot.

It is possible to set the bandwidth to a specific IPv4 address by using DHCPv4 leases. This can be done by setting a rate limit on the DHCPv4 lease itself, by doing this a dynamic simple queue rule will be added for the IPv4 address that corresponds to the DHCPv4 lease. By using the rate-limit parameter you can conveniently limit a user's bandwidth.

First, make the DHCPv4 lease static, otherwise, it will not be possible to set a rate limit to a DHCPv4 lease:

Then you can set a rate to a DHCPv4 lease that will create a new dynamic simple queue entry:

If allow-dual-stack-queue is enabled, then a single dynamic simple queue entry will be created containing both IPv4 and IPv6 addresses:

Since RouterOS v6.43 it is possible to use RADIUS to assign a rate limit per lease, to do so you need to pass the Mikrotik-Rate-Limit attribute from your RADIUS Server for your lease. To achieve this you first need to set your DHCPv4 Server to use RADIUS for assigning leases. Below is an example of how to set it up:

After that, you need to tell your RADIUS Server to pass the Mikrotik-Rate-Limit attribute. In case you are using FreeRADIUS with MySQL, then you need to add appropriate entries into radcheck and radreply tables for a MAC address, that is being used for your DHCPv4 Client. Below is an example for table entries:

To find any rogue DHCP servers as soon as they appear in your network, the DHCP Alert tool can be used. It will monitor the ethernet interface for all DHCP replies and check if this reply comes from a valid DHCP server. If a reply from an unknown DHCP server is detected, an alert gets triggered:

When the system alerts about a rogue DHCP server, it can execute a custom script.

With the help of the DHCP Option list, it is possible to define additional custom options for DHCP Server to advertise. Option precedence is as follows:

This is the order in which the client option request will be filled in.

This menu allows combining multiple options in option sets, which later can be used to override the default DHCP server option set.

A classless route adds a specified route in the clients routing table. In our example, it will add

A much more robust way would be to use built-in variables, the previous example can be rewritten as:

In the following configuration example, we will give an IP address from a particular pool for an Android-based mobile phone. We will use the RouterBOARD with a default configuration

Connect your mobile phone to the device to receive an IP address from the 172.16.16.0 network

If you do not know your devices Vendor Class ID, you can turn on DHCP debug logs with /system logging add topics=dhcp. Then in the logging entries, you will see Class-ID

To simply configure DHCP server you can use a setup command.

First, you configure an IP address on the interface:

Then you use setup a command which will automatically ask necessary parameters:

That is all. You have configured an active DHCP server.

Single DUID is used for client and server identification, only IAID will vary between clients corresponding to their assigned interface.

Client binding creates a dynamic pool with timeout set to binding's expiration time (note that now dynamic pools can have a timeout), which will be updated every time binding gets renewed.

When a client is bound to a prefix, the DHCP server adds routing information to know how to reach the assigned prefix.

Client bindings in the server do not show MAC address anymore (as it was in v5.8), DUID (hex) and IAID are used instead. After upgrade, MAC addresses will be converted to DUIDs automatically, but due to unknown DUID type and unknown IAID, they should be further updated by the user;

This sub-menu lists and allows to configure DHCP-PD servers.

DUID is used only for dynamic bindings, so if it changes then the client will receive a different prefix than previously.

Then you need can set a rate to a DHCPv6 binding that will create a new dynamic simple queue entry:

If allow-dual-stack-queue is enabled, then a single dynamic simple queue entry will be created containing both IPv4 and IPv6 addresses:

After that, you need to tell your RADIUS Server to pass the Mikrotik-Rate-Limit attribute. In case you are using FreeRADIUS with MySQL, then you need to add appropriate entries into radcheck and radreply tables for a MAC address, that is being used for your DHCPv6 Client. Below is an example for table entries:

Let's consider that we already have a running DHCP server.

To enable IPv6 prefix delegation, first, we need to create an address pool:

Notice that prefix-length is 62 bits, which means that clients will receive /62 prefixes from the /60 pool.

The next step is to enable DHCP-PD:

To test our server we will set up wide-dhcpv6 on an ubuntu machine:

DHCP relay does not choose the particular DHCP server in the DHCP-server list, it just sends the incoming request to all the listed servers.

Let us consider that you have several IP networks 'behind' other routers, but you want to keep all DHCP servers on a single router. To do this, you need a DHCP relay on your network which will relay DHCP requests from clients to the DHCP server. 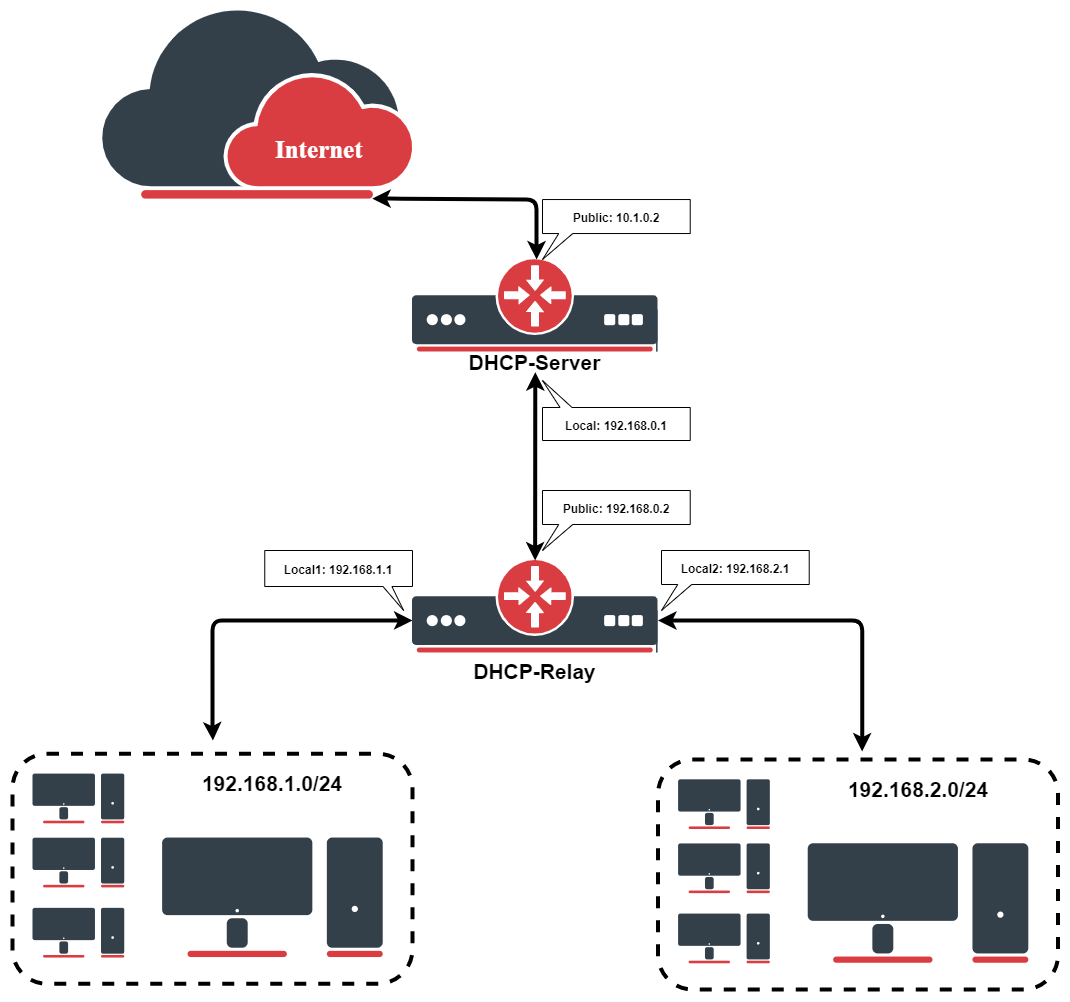