There are several types of switch chips on Routerboards and they have a different sets of features. Most of them (from now on "Other") have only the basic "Port Switching" feature, but there are a few with more features:

The command-line configuration is under the switch menu. This menu contains a list of all switch chips present in the system and some sub-menus as well.

Depending on switch type there might be available or not available some configuration capabilities.

Ether1 port on RB450G/RB435G/RB850Gx2 devices has a feature that allows it to be removed/added to the default switch group, this setting is available on the /interface ethernet switch menu. By default ether1 port will be included in the switch group.

Port mirroring lets the switch to copy all traffic that is going in and out of one port (mirror-source) and send out these copied frames to some other port (mirror-target). This feature can be used to easily set up a 'tap' device that receives all traffic that goes in/out of some specific port. Note that mirror-source and mirror-target ports have to belong to the same switch (see which port belongs to which switch in /interface ethernet menu). Also, mirror-target can have a special 'cpu' value, which means that mirrored packets should be sent out to the switch chips CPU port. Port mirroring happens independently of switching groups that have or have not been set up.

Properties under this menu are used to configure VLAN switching and filtering options for switch chips that support a VLAN Table. These properties are only available to switch chips that have VLAN Table support, check the Switch Chip Features table to make sure your device supports such a feature.

VLAN table specifies certain forwarding rules for packets that have a specific 802.1Q tag. Those rules are of higher priority than switch groups configured using the Bridge Hardware Offloading feature. Basically, the table contains entries that map specific VLAN tag IDs to a group of one or more ports. Packets with VLAN tags leave the switch chip through one or more ports that are set in the corresponding table entry. The exact logic that controls how packets with VLAN tags are treated is controlled by a vlan-mode parameter that is changeable per switch port.

VLAN ID based forwarding takes into account the MAC addresses dynamically learned or manually added in the host table. QCA8337 and Atheros8327 switch-chips also support Independent VLAN Learning (IVL) which does the learning based on both - MAC addresses and VLAN IDs, thus allowing the same MAC to be used in multiple VLANs.

Both vlan-mode and vlan-header along with the VLAN Table can be used to configure VLAN tagging, untagging and filtering, there are multiple combinations that are possible, each achieving a different result. Below you can find a table of what kind of traffic is going to be sent out through an egress port when a certain traffic is received on an ingress port for each VLAN Mode.

The host table represents switch chip's internal MAC address to port mapping. It can contain two kinds of entries: dynamic and static. Dynamic entries get added automatically, this is also called a learning process: when switch chip receives a packet from a certain port, it adds the packet's source MAC address and port it received the packet from to the host table, so when a packet comes in with the same destination MAC address, it knows to which port it should forward the packet. If the destination MAC address is not present in the host table (so-called unknown-unicast traffic) then it forwards the packet to all ports in the group. Dynamic entries take about 5 minutes to time out. Learning is enabled only on ports that are configured as part of the switch group, so you won't see dynamic entries if you have not set up port switching. Also, you can add static entries that take over dynamic if a dynamic entry with the same MAC address already exists. Since port switching is configured using a bridge with hardware offloading, any static entries created on one table (either bridge host or switch host) will appear on the opposite table as a dynamic entry. Adding a static entry on the switch host table will provide access to some more functionality that is controlled via the following params:

Rule table is a very powerful tool allowing wire-speed packet filtering, forwarding and VLAN tagging based on L2, L3 and L4 protocol header field condition. The menu contains an ordered list of rules just like in /ip firewall filter, so ACL rules are checked for each packet until a match has been found. If there are multiple rules that can match, then only the first rule will be triggered. A rule without any action parameters is a rule to accept the packet.

Each rule contains a conditions part and an action part. The action part is controlled by the following parameters:

The conditions part is controlled by the rest of the parameters:

Port isolation provides the possibility to divide (isolate) certain parts of your network, this might be useful when you need to make sure that certain devices cannot access other devices, this can be done by isolating switch ports. Port isolation only works between ports that are members of the same switch. Switch port isolation is available on all switch chips since RouterOS v6.43.

In some scenarios, you might need to forward all traffic to an uplink port while all other ports are isolated from each other. This kind of setup is called Private VLAN configuration, the Switch will forward all Ethernet frames directly to the uplink port allowing the Router to filter unwanted packets and limit access between devices that are behind switch ports.

To configure switch port isolation, you need to switch all required ports:

Override the egress port for each switch port that needs to be isolated (excluding the uplink port): 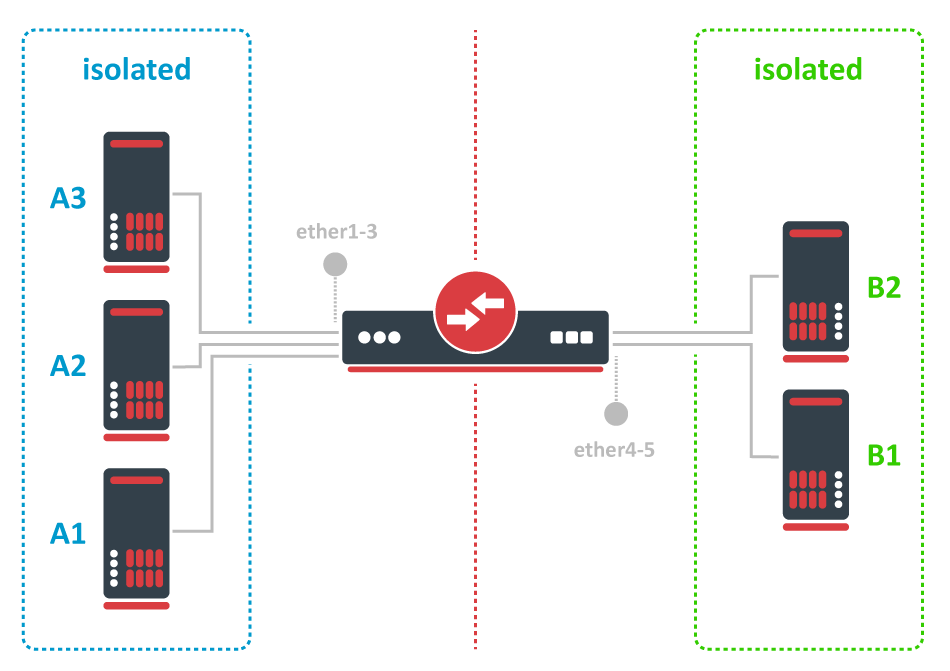 To configure isolated switch groups you must first switch all ports:

To create an isolated switch group for B devices:

All switch chips have a special port that is called switchX-cpu, this is the CPU port for a switch chip, it is meant to forward traffic from a switch chip to the CPU, such a port is required for management traffic and for routing features. By default the switch chip ensures that this special CPU port is not congested and sends out Pause Frames when link capacity is exceeded to make sure the port is not oversaturated, this feature is called CPU Flow Control. Without this feature packets that might be crucial for routing or management purposes might get dropped.

Some switch chips are capable of reporting statistics, this can be useful to monitor how many packets are sent to the CPU from the built-in switch chip. These statistics can also be used to monitor CPU Flow Control. You can find an example of switch chip's statistics below:

Some devices have multiple CPU cores that are directly connected to a built-in switch chip using separate data lanes. These devices can report which data lane was used to forward the packet from or to the CPU port from the switch chip. For such devices an extra line is added for each row, the first line represents data that was sent using the first data lane, the second line represents data that was sent using the second data line and so on. You can find an example of switch chip's statistics for a device with multiple data lanes connecting the CPU and the built-in switch chip: 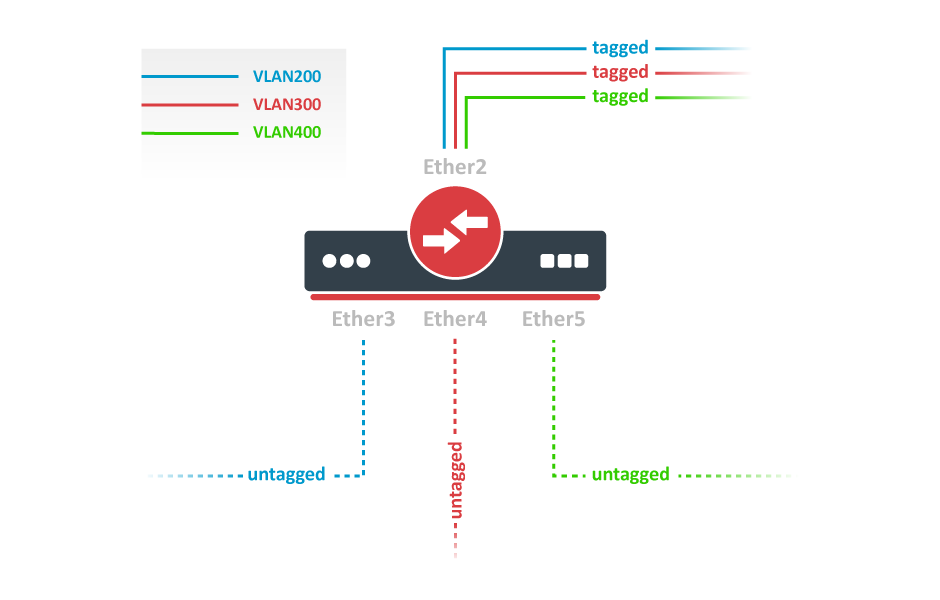 Switch together the required ports:

Assign vlan-mode and vlan-header mode for each port and also default-vlan-id on ingress for each access port:

VLAN Hybrid ports which can forward both tagged and untagged traffic. This configuration is supported only by some Gigabit switch chips (QCA8337, Atheros8327). 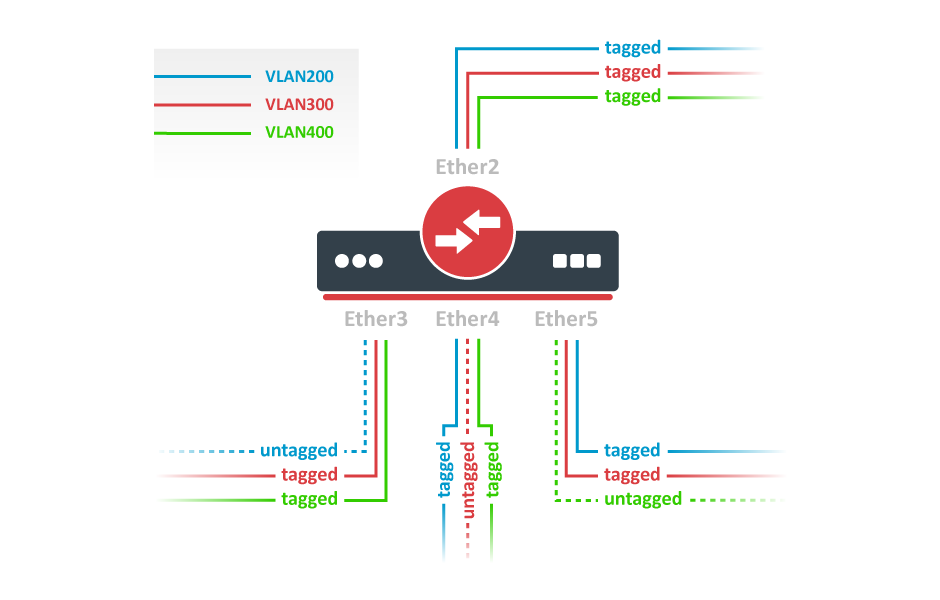 Switch together the required ports:

In switch port menu set vlan-mode on all ports and also default-vlan-id on planned hybrid ports:

In these examples there will be shown examples for multiple scenarios, but each of these scenarios require you to have switched ports. Below you can find how to switch multiple ports:

In these examples it will be assumed that ether1 is the trunk port and ether2 is the access port, for configuration as the following:

In order to make the device accessible only from a certain VLAN, you need to create a new VLAN interface on the bridge interface and assign an IP address to it:

Specify from which interfaces it is allowed to access the device:

In order to make the device accessible from the access port, create a VLAN interface with the same VLAN ID as set in default-vlan-id, for example VLAN 100, and add an IP address to it:

It is possible to allow access to the device from the trunk (tagged) port with untagged traffic. To do so, assign an IP address on the bridge interface:

Specify which ports are allowed to access the CPU. Use vlan-id that is used in default-vlan-id for switch-cpu and trunk ports, by default it is set to 0 or 1.

Many MikroTik's devices come with a built-in switch chip that can be used to greatly improve overall throughput when configured properly. Devices with a switch chip can be used as a router and a switch at the same time, this gives you the possibility to use a single device instead of multiple devices for your network.

For this type of setup to work, you must switch all required ports together

Create a VLAN interface for each VLAN ID and assign an IP address to it:

Setup a DHCP Server for each VLAN:

Enable NAT on the device:

Add each port to the VLAN table and allow these ports to access the CPU in order to make DHCP and routing work:

Specify each port to be as an access port, enable secure VLAN mode on each port and on the switch1-cpu port:

If your device has a switch rule table, then you can limit access between VLANs on a hardware level. As soon as you add an IP address on the VLAN interface you enable inter-VLAN routing, but this can be limited on a hardware level while preserving DHCP Server and other router-related services. To do so, use these ACL rules. With this type of configuration, you can achieve isolated port groups using VLANs.